Joshuah Barlow has cycled 22 miles to raise money for Crossroads. 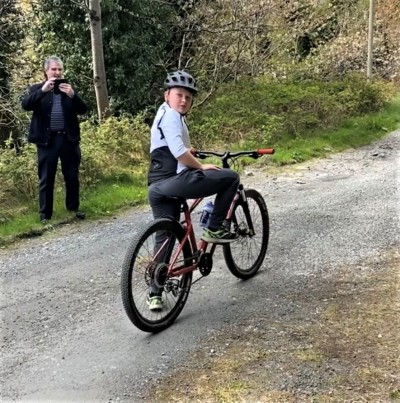 Joshuah, aged 11, wanted to take part in the Captain Tom 100 challenge and decided for his own challenge he would cycle 100 laps of the road behind his house, which is the equivalent of 22 miles.

Captain Tom 100 was a challenge set up by the Captain Tom Foundation, and asked participants to complete a challenge based around the number 100 to raise money for the Foundation or a charity of their choice. The challenge was to be done between Friday 30th April and Monday 3rd May which is Captain Tom’s birthday weekend.

Joshuah decided to take on Captain Tom 100 to raise money for our Young Carers project. He said:

“My Nanna Christine works with young carers. With Crossroads they get to do lots of fun stuff that other kids like me and my friends can do with our families. Sometimes it isn’t possible for young carers to do all that regular stuff because they have to much going on at home or it’s too difficult for their family. I think all kids should get to do cool stuff now and then or hang out with other kids so I would like to raise some money to help that happen.”

Joshuah loves going for bike rides with his Grandad, so thought this would be the perfect challenge for him.

“I used to be really nervous because I had a bad bike accident a few years ago and really hurt my face. It’s one of my favourite things now though so that’s why I want to do a bike riding challenge.”

Joshuah did an incredible job completing his challenge, and so far has raised a phenomenal £1,000! Everyone at Crossroads would like to say a HUGE congratulations to Joshuah and thank him for raising such an incredible amount for our Young Carers project!

Joshuah’s JustGiving page is still accepting donations, so if you would like to add to his total please visit his page: